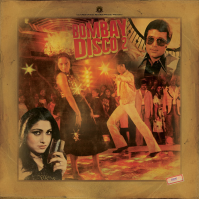 Welcome to our second celebration of the sounds of Bombay Disco, which digs deeper into the recordwallah shops in the bazaars of India. As fans of our first collection will recall, disco arrived in India in 1979, shortly after its mainstream popularity had peaked in the West. Disco songs remained in vogue throughout the subcontinent for a dozen years, in many ways because of the "cabaret scene" or "item number," a mainstay in South Asian cinema that dates back to the 1920s. Back then, these scenes depicted traditional courtesans or nautch (dancing) girls, but by the early 1960s dance sequences became much more surreal, with visuals inspired by Busby Berkley and music infused with jazz, Latin, and rock 'n roll. This tradition continued with an East-meets-West fusion of funk, disco and electro, to the hip-hop and EDM influences popular in South Asian films today. Disco songs continued to flourish after its early '80s ubiquity, often in the more tawdry films such as the horror movies that were immensely popular as the decade wore on. As the '90s continued, the cabaret sequences began to bear a closer resemblance to MTV videos. The music in these scenes changed to a similar style while the perennial love songs continued to entrance listeners. We haven't delved into the more massive film hits here, since the majority of those songs have been anthologized elsewhere. We prefer to dig deeper into the thousands of dusty, mold-encrusted records found in the back alley shops in India's teeming cities. For your dancing pleasure, we've cleaned off and polished up these vintage disco delites for your manoranjan (entertainment). Enjoy a cocktail and get on the dance floor! From the extensive liner notes, which by the way includes incredible cocktail recipes to enhance the Bombay Disco 2 listening experience.