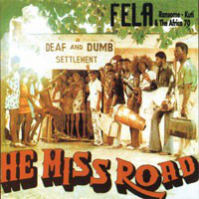 He Miss Road' combines the sound of James Brown-style 70s funk with a stripped down Afro-beat performance. Ginger Baker produced this ethereal, nearly psychedelic album with Tony Allen on drums, backed by Felaâ€™s Africa 70 band. The title track refers to the ways in which people have lost their way - and the ensuing chaos it causes. Through call-and-response lyrics, Fela illustrates a few ways in which someone has â€œmissed the roadâ€, including a gorilla who runs out of the jungles and into Lagos, and a musician who sings only for the deaf. This last example is a caustic personal attack on a fellow Lagosian musician who had stolen one of Felaâ€™s girlfriends - the attack extends even onto the original album cover, where this point is literally illustrated.