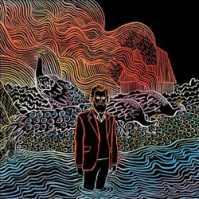 Kiss Each Other Clean

Iron & Wineâ€™s â€˜Passing Afternoonâ€™ is quite possibly one of the most delicately constructed songs ever made, containing the lyric which brought about the name of its parent album, â€œthere are things that drift away, like our endless numbered days.â€ Plaintive piano keeps time as gentle guitar lines provide subtle accompaniment to Sam Beamâ€™s beautiful vocal. Nick Hornby once described Teenage Fanclubâ€™s superlative record â€˜Songs From Northern Britainâ€™ as â€œthe next best comfort food you can buy if youâ€™ve already got â€˜Rubber Soulâ€™.â€ To that list you could arguably add that pristine album.

Things took a curious turn with 2007â€™s â€˜The Shepherdâ€™s Dogâ€™, which pushed and pulled in different directions as Beam attempted to simultaneously explore and muddy his signature sound. Whilst it broke fewer hearts than its predecessor, it pointed the way to an intriguing future. But things have been quiet since, save for the excellent odds and sods collection, â€˜Around The Wellâ€™, which only served to remind the listening public of the more sparse songs of old.

Some concern was expressed at early remarks from Beam suggesting that â€˜Kiss Each Other Cleanâ€™ could be described as a â€œpop recordâ€, adding that â€œit sounds like the music people heard in their parentsâ€™ car growing upâ€¦ that early-to-mid-'70s FM, radio-friendly music.â€ While the sharper edges of â€˜The Shepherdâ€™s Dogâ€™ have been smoothed over, this is not a record likely to suddenly storm the shelves of your local supermarket. Yes, things sound a little different but there is no cause for alarm. Quite the opposite, in fact, for album number four is the second essential Iron & Wine album to be released, and the first for new label 4AD. The musical backdrop may continue to change but the beguiling constant â€“ Beamâ€™s voice â€“ is just as alluring as ever.

These ten songs ooze warmth, littered with classic rock gear changes, acoustic thrums and shuffling bass but the rhythmic schizophrenia from the last outing still remains intact. Although â€˜Kiss Each Other Cleanâ€™ is yet further down the road from â€˜Our Endless Numbered Daysâ€™, it is still quite distinctively Iron & Wine. That said, if early outings left you cold and wishing that there was a little more meat on the bones, then this might be the time to commit some cash for a re-evaluation.

As has always been his way, the lyrics offer a darker undercurrent in contrast to the more saccharine surface layers. With his knack for illuminatingly detailed description, Beam once again defines the albumâ€™s landscape. Opening track â€˜Walking Far From Homeâ€™ offers the unsettling imagery of â€œsaw a car crash in the country, where the prayers run like weeds along the road,â€ while â€˜Rabbit Will Runâ€™, accompanied by a suitably unsettling soundtrack, declares that â€œjudgement is just like a cup that we share, Iâ€™ll jump over the wall and Iâ€™ll wait for you thereâ€ as part of a tale of wrongdoing and recriminations.

Just as the act of dressing Brian Blessed like the Pope wouldnâ€™t stop him having Brian Blessedâ€™s voice, the broader approach to musical arrangements which have graced more recent Iron & Wine outings do not in any way diminish the presence of Beamâ€™s remarkable vocals. â€˜Godless Brother In Loveâ€™ and â€˜Tree By The Riverâ€™ are the two shining examples of uplifting harmonies and pop classicism, delivering on the earlier claim to sound like music played by peopleâ€™s parents. Provided said parents liked a bit of Beach Boys.

â€˜Kiss Each Other Cleanâ€™ is a curiously comforting record. Even though heart-warming lullabies are followed by squelching funk, and melancholy drips from certain tracks, the overarching sense of warmth in this sound makes for a deeply satisfying listen and an ideal companion during the remaining cold, dark months.