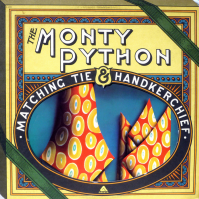 The group's third studio album in its original packaging is a find for fans of vinyl trickery the B-side contains two continuous tracks, leaving the stylus a 50-50 chance at playing the track you want. The group reprises several skits from the show ("Bruces," "Cheese Shop") without the hindrance of playing to a live audience in essence, it's lightning fast and witty to boot. Most of the Pythons came from a tradition of radio skit comedy, so they are not out of their depth, and are as liable to play with the conventions of recorded sound as the Firesign Theatre, their American contemporaries (though the Pythons never attempted on record anything like the concept albums of Firesign). Of the originals, "Novel Writing" (literature broadcast as sport) and "Word Association Football" (John Cleese at his densest) are winners. Ex-Bonzo Dog Band member Neil Innes also provides music on the bizarre "Background to History" in which dissertations on Medieval English farming are sung in the style of Bob Marley, Gary Glitter, and Joe Cocker.