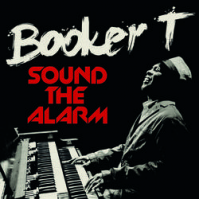 Booker T. Jones follows back-to-back Grammy wins for his previous two albums with 'Sound The Alarm' on Stax / Concord Music Group. This marks Booker's return to Stax, a label revered for the gritty soul sound he helped create with Memphis' first integrated band in the early '60s, and features collaborations with some of the finest talents in modern soul and R&B including Mayer Hawthorne, Anthony Hamilton, Vintage Trouble, Estelle, Gary Clark, Jr., Luke James and more. 'Sound The Alarm' is a celebration of the past, present and future of R&B with flares of hip-hop bravado on the title track with Mayer Hawthorne and 'Gently' with Anthony Hamilton, plus an explosive performance from Vintage Trouble's Ty Taylor on 'Your Love Is No Love.' Booker's B3 is front and center, especially on instrumentals 'Feel Good,' 'Austin City Blues' with Gary Clark, Jr. and 'Fun,' a joyous, pulsing jam. 'Watch You Sleeping' features Bill Withers' daughter Kori on a vocal duet with Booker, and an instrumental with his son Ted on guitar on 'Father Son Blues' closes the album. Booker T wrote or co-wrote all twelve songs on 'Sound The Alarm.' He co-produced the album with brothers Bobby Ross and Issiah 'IZ' Avila, who haveworked with Usher and Mary J. Blige. The Avila brothers also play in the rhythm section on most of the tracks.