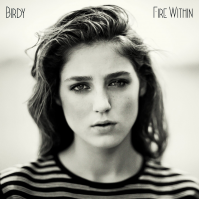 Fire Within is the second album from British singer/songwriter Birdy. The album sees Birdy come to the forefront as a songwriter in her own right, having written/co-written all of the 11 tracks on the new album. Collaborating with some of the biggest names in the business including Ryan Tedder (Beyonce), Dan Wilson (co-wrote and produced "Someone Like You" for Adele), Rich Costey (Muse, Arctic Monkeys, Sigur Ros) and Ben Lovett from Mumford & Sons, whom sheâ€™s collaborated with in the past. Sheâ€™s also worked with musicians including Rage Against the Machine bass player Timmy C and Paul Jackson Jnr and Omar Hakim (Daft Punk's band on their album Random Access Memories).