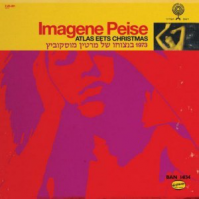 The Flaming Lips secret 2007 Christmas album, Atlast Eets Christmas was previously released in a very limited physical quantity on CD only under the pseudonym Imagene Peise (with a sticker that read "Love Is The Answer - Merry Christmas From The Flaming Lips 2007"). This Black Friday release will mark the first time the album is available both widely.

The Flaming Lips are an American rock band formed in Oklahoma City, Oklahoma in 1983. Instrumentally, their sound contains lush, multi-layered, psychedelic rock arrangements, but lyrically their compositions show elements of space rock, including unusual song and album titles—such as "What Is the Light? (An Untested Hypothesis Suggesting That the Chemical [In Our Brains] by Which We Are Able to Experience the Sensation of Being in Love Is the Same Chemical That Caused the "Big Bang" That Was the Birth of the Accelerating Universe)". They are also acclaimed for their elaborate live shows, which feature costumes, balloons, puppets, video projections, complex stage light configurations, giant hands, large amounts of confetti, and frontman Wayne Coyne's signature man-sized plastic bubble, in which he traverses the audience. In 2002, Q magazine named The Flaming Lips one of the "50 Bands to See Before You Die."