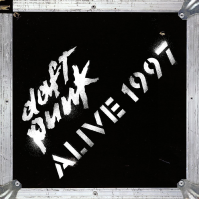 Daft Punk's ‘ALIVE 2007’ set, which won 2 Grammy Awards in 2009 (Best Electronic Album and Best Electronic Single categories) and was previously only available on CD and digital, will be released for the first time as a double vinyl with a triple gatefold sleeve.

Derived from their live performance at Bercy on 14 June 2007, this album was originally published the same year on November 19th. Through this amazing live experience, Daft Punk manipulated and reworked their established material, transposing and deconstructing the structures of their studio tracks.

***Unfortunately the LTD box set has sold out***

A limited edition of ‘ALIVE 2007’ will be released at the same time, in a special box including the album on 2 solid white vinyl LPs, plus a vinyl bonus (Side A: the show's encore (human after all / together / one more time (reprise) / music sounds better with you) /Side B : ‘ALIVE 2007’ pyramid logo etched), a 52 pages book (pictures taken during the shows), a slipmat and a download card.

‘ALIVE 1997’ is also being reissued separately. Recorded in 1997 in Birmingham during their first European tour, a few months after the release of ‘Homework’, this first live testimony was released in 2001. 45 minutes of non-stop live mixing, featuring the band’s first standard tracks (Da Funk, Rollin' & Scratchin'…) along with those techno-electronic explosions unique to Daft Punk!