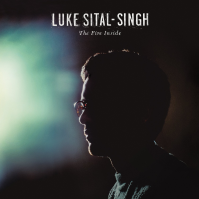 "Earning comparisons to singer-songwriter greats such as Jeff Buckley, Bon Iver and Neil Young, Luke Sital-Singh has been tipped for greatness with inclusion in the BBC Sound of 2014 poll.

Raised in New Malden and now based in North London, Luke Sital-Singh debuted in 2012 with the ‘Fail For You’ EP, whose four tracks won rave reviews. Two further EPs last year – ‘Old Flint’ and ‘Tornados’ – only deepened the sense that Luke was limbering up for a sensational debut album. Now the wait is nearly over. The Fire Inside produced by Iain Archer, it is an album of extraordinary power and brutal candour. "