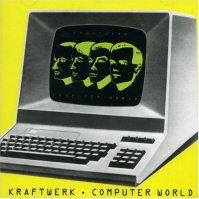 Originally released in 1981 Computer World is probably the definitive Kraftwerk album and scarily ahead of its time across the 7 tracks you can hear the blueprint for electro techno and synth pop sounds and ideas that would be recyled by other acts for years to come features the singles Pocket Calculator & Computer World.