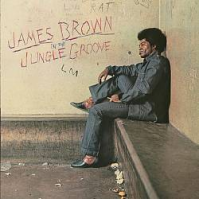 In the Jungle Groove

In the Jungle Groove was one of the first (and still one of the best) collections of James Brown's transitional and hard-hitting soul/funk workouts from 1969-1971. While the first few numbers here feature Brown sidemen who were in on his mid-'60s hits, the majority feature the original J.B.'s outfit that helped the singer forge several extended and funk-defining sides during 1970. Faced with a walkout by his old band, Brown partially formed the J.B.'s out of the New Dapps from Cincinnati, taking aboard brothers Phelps "Catfish" Collins on guitar and William "Bootsy" Collins on bass many of those ex-band members, namely drummer Clyde Stubblefield, guitarist Clair St. Pinckney, and trombonist Fred Wesley, would eventually return to flesh out the J.B.'s lineup. The one constant was vocalist and organist Bobby Byrd, who had been with Brown since the singer's start in 1956. The incredible grooves Bootsy Collins and Stubblefield laid down here would become manna for hip-hop DJs over 15 years later, with the album's "Funky Drummer (Bonus Beat Reprise)" becoming one of the supreme breakbeats of all time. Filling out the collection are the very soulful pre-J.B.'s tracks "It's a Brand New Day" (tenor saxophonist Maceo Parker's only appearance on the disc) and the original "Funky Drummer," as well as the post-Bootsy cut "Hot Pants (She's Got to Use What She's Got to Get What She Wants)." All the numbers here are as in the pocket as you will ever hear in soul and funk. And while many of these tracks are found on various packages like Polydor's Funk Power and Foundations of Funk, In the Jungle Groove has the upper hand with its unequaled coverage of Brown's transformation from soul brother number one to funk originator.