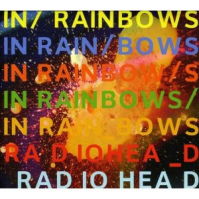 Itâ€™s very likely that even if you havenâ€™t heard the contents of Radioheadâ€™s seventh album, youâ€™ll be aware of its existence. Released as a digital download by the band themselves before a CD release was even considered, In Rainbows was lauded for innovation before a note of music was heard. Luckily, the music matches the hype--it takes the best part of Radiohead's previous works and advances the formula even further. While the opener "15 Step"--all skittering drum patterns and dub-style bass--may hark back to the electronica of Kid A, the sound soon gives way to a more guitar-based sound. Whilst not as musically heavy as previous albums, the tunes are far more focused and passionate--"Bodysnatchers" is based around a hypnotic, distorted bass riff, while the beautiful string-drenched "Nude" is a true Radiohead classic. Lyrically, like Thom Yorkeâ€™s solo album The Eraser, the lyrics are sketches of suburban paranoia, and the eerie sense of things no! t being quite right. This is especially true on the piano-based closer "Videotape", which poignantly details a man watching his lifeâ€™s achievements in his final moments. In short, In Rainbows is another masterpiece from the Oxford quintet.