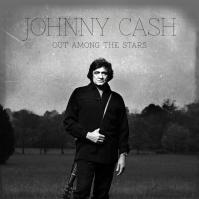 Out Among The Stars

Itâ€™s been thirty years in the making, spending most of the three decades collecting dust in a vault. â€˜Out Among the Stars,â€™ an album of 12 recently discovered Johnny Cash recordings, is about to reach the ears of the masses for the very first time.
The tracks on this album â€” which have never been released in any form and are not demos, outtakes or alternate versions â€” were originally recorded in Nashville, Tenn. at Columbia Studios in 1981 and 1111 Sound Studios in 1984. They were produced by Billy Sherrill, the architect of the â€œcountrypolitanâ€ sound who was heading A&R at CBS Records Nashville at the time. However, they remained in the vaults during the years Columbia Records released Cashâ€™s last albums â€” and sat forgotten.
Then, in 2012, these recordings surfaced when John Carter Cash, along with the Cash experts at Legacy, was cataloging his father and motherâ€™s exhaustive archives.
â€œWhen my parents passed away, it became necessary to go through this material,â€ the younger Cash says. â€œWe found these recordings that were produced by Billy Sherrill in the early 1980s â€¦ they were beautiful.â€
New music by an iconic singer who passed away in 2003 sounds almost unbelievable, but the best part is â€¦ itâ€™s true! â€™Out Among the Starsâ€™ tracks include duets with June Carter Cash and Waylon Jennings, as well as an expanded ensemble featuring a young Marty Stuart on guitar and mandolin and Nashville A-Team members Jerry Kennedy (guitar), Pete Drake (steel guitar), Hargus â€˜Pigâ€™ Robbins (piano) and Henry Strzelecki (bass).
The Man in Black will continue to live on via this new release. â€˜Out Among the Starsâ€™ connects the revolutionary rockabilly of his Sun Records years to the epochal final albums he made for American Recordings