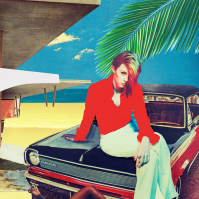 British synth pop singer Elly Jackson, aka La Roux, has announced a followup to her eponymous 2009 debut. Trouble in Paradise is out July 7 on Polydor.

For Trouble in Paradise, Jackson worked with co-producer Ian Sherwin. The last record was written and produced with Ben Langmaid.