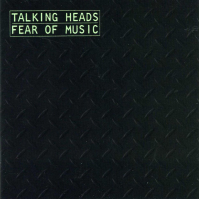 Time stands still when you're cracking up. At the brink of mental overload, there's a revelatory instant â€” a freeze frame in which everything fits together in new ways. Logic dissolves, paralogic reigns. And in that precarious moment, the world is fixed in place, skewed and renewed.

David Byrne's lyrics on Talking Heads' Fear of Music are paralogical visions stated with almost childlike directness: he thinks that air hits him in the face, that animals want to change his life, that "someone controls electric guitar." By itself, this perspective makes Byrne's songs fascinating. But what makes Talking Heads my favorite and probably the best rock band anywhere is that they've invented an audio analog to their view from the brink: rock music that warps and suspends time.

They use a simple device: repetition. Unswerving rhythms, immobile harmonies. Each tune is a chain of sections linked by rhythm, each section a matrix of interlocking riffs. "I Zimbra" stakes Talking Heads' claim to pure mechanization. One by one, the instruments click into place in a rhythm pattern fleshed out by Afro-futurist harmonies and topped by the meaningless chanted syllables of a poem by Twenties Dadaist Hugo Ball. At composition's end, Robert Fripp's guitar phases through the whole pulsing assemblage like the shuttle of a high-speed loom.

Even in the more conventional numbers â€” those built on ordinary major and minor chords â€” anything repeatable gets repeated. "Heaven," Byrne sings in his minimalist anthem of the same name, "is a place where nothing happens," and while his songs aren't by any means completely static, their harmonies don't move as fast as most pop progressions do. When a tune lingers on one chord, riffs that go with that chord are played over and over. As for rhythm, drummer Chris Frantz will sometimes hold one lick for an entire cut: for example, the steady hi-hat eighth notes he plays throughout "Mind" and "Heaven." It's deliberately mechanical, but because the riffs are complexly intertwined and there's a solid backbeat, the repetition doesn't inspire Kraftwerk-style boredom or disco claustrophobia. Instead, there's a sense of time being held at bay.

Yet Byrne's vocals keep the music in the present tense. He sings like a Mouseketeer trapped in an endless anything-can-happen day: rattled, wide-eyed, quavery, breaking into glossolalia whenever he runs out of words. Sometimes he slides into sync with the other members of the band, sometimes he dithers above them in lunatic abandon. Though his cohorts play like an efficient machine, David Byrne maintains the beauty of human error.

Last year's More Songs about Buildings and Food signaled that the group, on its second album, had perfected its tech-mech music. The LP was a manic, oddly funky, hard-edged, catchy masterpiece. On Fear of Music, Talking Heads take that style and proceed to torture-test it under every distortion they and co-producer Brian Eno can devise. "Animals," with its dissonance and odd meters (5/4 and 7/4), radically extends the band's musical vocabulary, while other liberties (the jumpy, angular countermelody in "Air," Tina Weymouth's off-the-beat bass line in "Mind") are infiltrated into the more "normal"-sounding numbers. And the new record is programmed to emphasize its most ominous cuts: it opens with "I Zimbra," winds up side one with "Memories Can't Wait," and closes side two with "Animals," "Electric Guitar" and "Drugs." Whereas More Songs about Buildings and Food was crisp and outgoing, Fear of Music is often deliberately, brilliantly disorienting. Like its black, corrugated packaging (which resembles a manhole cover), the album is foreboding, inescapably urban and obsessed with texture.

Fear of Music is Talking Heads' most elaborate production so far, teeming with overdubs and effects the group doesn't try to reproduce in concert. Sounds emerge out of nowhere, echoes tangle the beat, instrumental timbres form unholy alloys. For the LP's spookiest tune, "Memories Can't Wait," the mix is as murky as a film-noir interior. Byrne's vocal is echoed, reverbed, tape-reversed and dizzyingly sped up while he sings about an endless "party in my mind." In the final verse, when suddenly "Everything is very quiet," his voice slips out front, the key changes and the echoes slink away. It's hardly subtle, but it works.

"Drugs" is a radical reworking of a song the band had been performing live and calling "Electricity." Onstage, "Electricity" was an easygoing, almost countryish, guitar-vamp number. On Fear of Music, Eno and Talking Heads eliminate the vamp, reverse the beat, stick a bell on every downbeat (like Jimmy Cliff's "Sitting in Limbo"), change some lyrics, rewrite the bridge in a different key and fill the hole left by the vamp with echoes and strange noises, including slow breathing, garbled voices and â€” just when the tune threatens to get too serious â€” what sounds like a bullfrog croak.

Though New Wave conservatives may be appalled at such elaborate studio tinkering, the songs don't suffer a bit. They're not sweetened â€” they're seasoned. In "Mind," Byrne double-tracks his vocals in ragged octaves on the chorus (which is inspired: e.g., "I need something to change your mind"), ostensibly making it twice as plaintive. But all the while, a giddy, slapstick synthesizer line is busy cutting away any trace of sentiment.

For me, Fear of Music's least interesting track is the rock-disco-like "Life during Wartime," which sounds almost live. The problem isn't the production but the song itself. While "Life during Wartime" is both structurally and harmonically conventional, boasts a silly chorus lyric and even adds a conga player to the group, the tune's real trouble is that it lacks Talking Heads' usual counterpoint. On the other hand, some of the words are arresting: "I got three passports, a couple of visas/You don't even know my real name."

Byrne has drastically shifted his verbal approach for Fear of Music. In his lyrics for earlier records, he let himself be self-conscious: he'd observe, analyze and make judgments. His new lyrics virtually eliminate abstraction â€” he doesn't consider, he feels. There's very little past and no future, just a jumble of sensations, as if it's all he can do to handle right now. The songs are invariably in the first person and mention very few outside characters: the singer's inner world is his last refuge.

This way lies solipsism perhaps. But David Byrne's private, paranoid universe is dangerously close to yours and mine. "Cities," in which a homeless Byrne has to find himself "a city to live in," fades in with a riff and the sound of sirens. I'd played Fear of Music more than a dozen times before I realized that the sirens weren't outside my window.