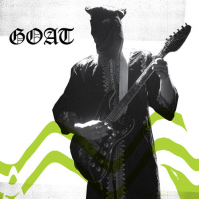 In August 2012 Swedish band Goat released their debut album, World Music.The record went on to become one of the most talked about albums of the year, topping the Piccadilly â€˜Best of 2012â€™ list and the following year, the band took the album on the road. Starting off a triumphant year of shows was Goatâ€™s performance (or Ritual as the band likes to call them) at Roadburn Festival. A â€˜packed to the raftersâ€™ performance was the perfect warm up to their first proper tour, that saw them take on the USA.

Footage, audio and photos of their sold out US shows streamed across the internet and revealed a band at the top of their powers. They had taken the magic of World Music, extended, psyched out and explored the groove of the album further representing it in a mesmerising live performance. The bods at Rocket realised that they needed to capture and document this much hyped set for all the world to experience. On July 27th 2013, the eve of their now legendary Glastonbury performances the band took the stage at Camdenâ€™s Electric Ballroom in London to celebrate the recent launch of their single â€˜Stonegoatâ€™.

The show was incendiary; the 1,100+ crowd either danced furiously to the bandâ€™s psyched grooves or stood there, mouths open and gazed in awe at the spectacle they couldnâ€™t believe they were witnessing. It truly was a band on top of their game, which this LP called Live Ballroom Ritual will forever prove. Goat went on to wow more people across Europe when their on stage rituals visited the cream of the summer festivals at Primavera, Roskilde, Flow, Way out West etc. After a long but successful summer the band are now back in Korpilombolo, writing the follow up to 'World Music'. We hope to see the first fruits of this at Decemberâ€™s appearance at the last ever ATP festival curated by Loop, and at the official launch party of this live album at Londonâ€™s Koko on December 2nd.