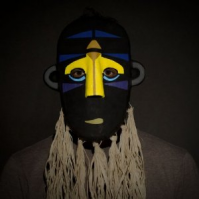 SBTRKT's debut album pulls off a series of impressive feats: it's bursting with fresh ideas, and yet it sounds immediately familiar. It's sound-patterns and rhythms can easily soundtrack the ecstatic hands in the air dance floor moments as well as reliving the monotony of the morning commute. Its influences are incorporated with subtlety and sophistication: dense enough to interpret, light enough to dance to.
While he has had multiple releases in single and EP forms, this is his first full-length, and about that he says "This release is the culmination of a longer period of constant writing and collaboration, tracks on previous EPs were written as singular pieces. This record is much more of a whole project, more representative of my thoughts and ideas as an artist and each track was completed with the aim to be coherent together."