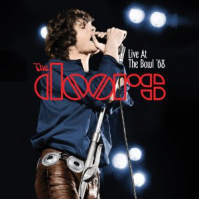 The perfect live performance of 5th July 1968 - which famously counted Mick Jagger among its audience members - was captured on film and on record, and is now being released by Rhino. Although parts of the show were released in 1987 by Elektra, this is the first time ever that the show has been available in its entirety.
The set contains US #1 hits â€˜Light My Fire,â€™ and â€˜Hello I Love You,â€™ as well as the too often omitted masterpieces â€˜Moonlight Drive,â€™ and â€˜Unknown Soldierâ€™.