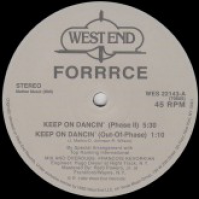 Another classic from the West End archives! Forrrce's "Keep On Dancin" from 1982 was a huge record across the board from Bronx block parties to the Paradise Garage in NYC and DJ Harvey's "Moist" nights in London town, it's popularity was bolstered by a fierce Francois K dub mix on the B-side that stripped the record right back to it's most basic elements with a healthy dose of reverb assisted psychedelia thrown in for good measure! This killer cowbell led Boogie jam has always been a big hit with Disco freaks and continues to sound fresh some 30+ years later even making it's way into veteran UK DJ and music historian Sean P's "100 Boogie Essentials 1980-1984" list. High praise indeed! Re-mastered from original tape transfers, re-pressed and made available again for 2015 in conjunction with West End Records, New York City.