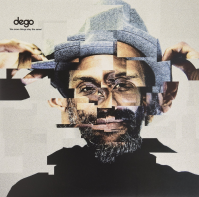 The More Things Stay The Same

In making the album, dego digs deep into his life experiences. From the first track to the last, his sonic signature inscribes his impressions on the duality of life. Dego says: “The More Things Stay the Same is about the state of play - truth can bring despair as well as hope. The two sit side by side. Like history often repeating mistakes, but also bringing learning and progress.”

For the LP, dego leads a team of stellar musicians and trusted co-conspirators: multi-instrumentalists Kaidi Tatham, Mr Mensah and Matt Lord, as well as vocalist Sharlene Hector of Basement Jaxx fame. Hip-hop artist TY also makes an appearance on ‘The Middle Ground’. With The More Things Stay the Same, dego carries out the vision of his influential 2000BLACK label and collective, formed in 1998 to continue the legacy of black music and to contribute to what makes soul, boogie and dance music great.

Undefined by any singular genre and a pioneering force in London club music culture in drum ‘n’ bass and London boogie, dego continues to forge dance music’s intrepid yet soulful future in his constant search for the ultimate groove.

“Our sonic hero, dego, proves once again - quality over quantity. Timeless beauty on this album, hinting at the past but well planted in the future. Bravo!”-- King Britt