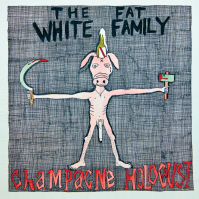 Champagne Holocaust, originally released in the summer of 2013 is being re-released by Trashmouth Records on Monday September 15th 2014.

The re-release will include a bonus 10-track CD featuring un-released / live tracks and new inner-spread artwork featuring 17 drawings by Saul from the band of famous serial killers which are featuring in a forthcoming exhibition alongside work by legendary 60’s cartoonist R. Crumb.

Finally, after a summer of shockingly good appearances at most of the UK festivals, including Glastonbury, Latitude, Green Man and Reading / Leeds, they round off their Tour of Tenderness with a run of UK headline dates in September before heading off to start work on their second album, due in 2015.