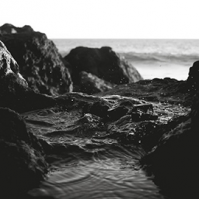 If you heard Obsidian last year, you already understand. On his sophomore album as Baths, Will Wiesenfeld fully shed of his sonic influences with a staggering work of graveyard beauty. Contrasts to the other artists became null. Giving it a 8.6 “Best New Music,” Pitchfork hailed it as a “subversive work that gets uncomfortably close to pop, confronting closed minds with what they don’t want to believe.”

Always a gifted musician, Baths became a fully conceived artist: a songwriter of uncommon sensitivity, a whimsical and romantic spirit, and a lay-me-gently-down falsetto. Think of his Anticon EP, Ocean Death, as a companion piece—the Dia De Los Muertos to Obsidian’s Halloween. It’s title and the eponymous opening track existed before a single note of 2010’s Cerulean had been recorded. Darker in tone, they were always targeted for a sophomore album, but wound up a different cut of gem.

Ocean Death is the exquisite setting. Just five songs and a shade over 20 minutes, the idea was to avoid over-thinking. Songs were perfected not embellished. The subject matter remains dark-tinted pop. “Ocean Death” reclines in the aquatic seabed. The lyrics are simple and bleak, but the effect is celestial. The 3 a.m. introspection and heart beat pulse are almost reminiscent of Four Tet or Pantha Du Prince. The pulse is almost minimal techno, but it’s suffused with maximalist emotion.

A small part of Ocean Death was recorded in a hotel room in Spain, but it was mostly done at a friend’s home in LA, the same place where Obsidian was completed. Both records traverse similar terrain: morbid lyricism, direct vocal melodies, a felicity in subsuming electronic experiments into pop songs. It’s about death, apathy, and loneliness. It sounds like a final love letter to a chapter of life that has already ended—and maybe it has. Songs are currently being theorized for a third full-length, and the direction is vastly different.

It’s not normally in Baths’ nature to rehash old ideas. In a sense, Ocean Death was an experiment to animate these beautiful but discarded fragments. We’re lucky they survived. Baths has a rare gift for cloaking melancholy with gorgeous arrangements. The emotions are raw, but the musicianship is refined. Guitars are scraped and processed. Vocals are clipped and layered, drowned and resurrected. But what lingers are the songs themselves; ideas fully formed and immortalized, built to haunt forever.