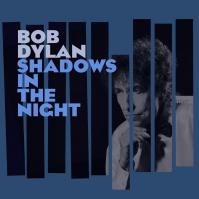 Shadows In The Night

On his website this morning, Dylan is quoted as saying: “I’ve wanted to do something like this for a long time but was never brave enough to approach 30-piece complicated arrangements and refine them down for a five-piece band.”

“Shadows in the Night” will include such standards as “Autumn Leaves,“ “What’ll I Do?” “Some Enchanted Evening” and several tunes popularized by Frank Sinatra including “The Night We Called It a Day” and “I’m a Fool to Want You.” Earlier this year, Dylan released “Full Moon and Empty Arms,” issued originally by Sinatra in 1945 when Dylan was four years old. The album closer, “That Lucky Old Sun,” was a hit in 1949 for Frankie Laine. Dylan has performed it occasionally in concert since 1985.

Dylan recorded the music live in the studio with his band. “We knew these songs extremely well. It was all done live,” he said. “Maybe one or two takes. No overdubbing.

“I don’t see myself as covering these songs in any way,” he added. “They’ve been covered enough. Buried, as a matter a fact. What me and my band are basically doing is uncovering them. Lifting them out of the grave and bringing them into the light of day.”