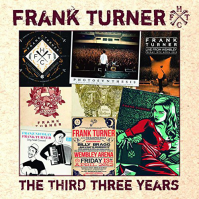 The third instalment of Frank Turner's self-compiled collection of material that does not feature on his studio albums over the last 3 years. The Third Three Years features previously unreleased demos, radio sessions, b-sides, cover versions, duets, live tracks and one-off side projects, plus artwork by Frank including personal touches such as photos and pictures since The Second Three Years. The past three years have seen Frank raise from the underground to becoming a household name - selling out Wembley Arena, playing at the Opening Ceremony of the Olympic Games and headlining an UK arena tour. This is a unique document of one of Britain's rare talents. The Third Three Years is announced immediately off the back of Frank's latest UK sell-out headline tour. Throughout the summer he headlined UK Festivals such OnBlackheath, Kendall Calling, YNot, Standon Calling, Wakestock as well as performing on the Main Stage at Sonisphere supporting Iron Maiden (Frank's specialist subject on Celebrity Mastermind in January 2014, which he won). Earlier in 2014 he completed his first headline Arena Tour - playing at Manchester MEN and London's O2 Arena. Selling over 42,000 tickets across the whole tour.