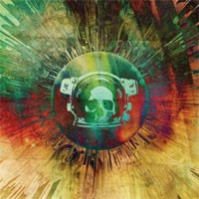 Amorphous Androdgynous (aka Future Sound of London in their psychedelic rock guise) are notorious for pushing the boundaries of electronic music. They have recently produced Noel Gallagher's album which he described as 'far out'.

Strictly Kev aka DJ Food is the sole remaining member of the multi-producer DJ Food project. He has a massive fan base and a cult following from DJing the world over.

In tandem Kev has enjoyed a career as chief designer for Ninja Tune since the early 90s. In 2010 he was responsible for the entire look and design of the Ninja Tune XX campaign and releases.

Strictly Kev curated an exhibition at the Pure Evil Gallery in london to display artwork, prints and a psychedlic instillation from his album. He commissioned the artwork from the legendary 2000 AD comic artist Henry Flint. Press shots of Kev in a replica astronaut suit shot by renowned photographer Will Cooper-Mitchell complete the sci-fi concept.

Amorphous Androgynous have described this release as a 'Monstrous Psychedelic Bubble Mix' .