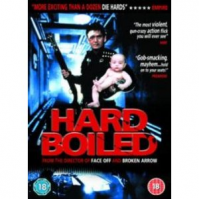 Masterful Hong Kong action director John Woo (The Killer, Face/Off) turns in this exciting and pyrotechnic tale of warring gangsters and shifting loyalties. Chow Yun-Fat (The Replacement Killers) plays a take-no-prisoners cop on the trail of the Triad, the Hong Kong Mafia, when his partner is killed during a gun battle. His guilt propels him into an all-out war against the gang, including an up-and-coming soldier in the mob (Tony Leung) who turns out to be an undercover cop. The two men must come to terms with their allegiance to the force and their loyalty to each other as they try to take down the gangsters. A stunning feast of hyperbolic action sequences (including a climactic sequence in an entire hospital taken hostage), Hard Boiled is a rare treat for fans of the action genre, with sequences as thrilling and intense as any ever committed to film.