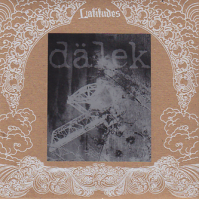 New Jersey's heavyweight avant-HipHop duo laid down their Latitudes session on 6th-7th July 2005 at Southern Studios, just miles away from the London bombing attacks. For many reasons, their sombre, affected recordings have been archived until now, but great music always has a habit of surfacing, whether it's six years down the line or 50. It plays through as a densely detailed yet spaciously arranged multicultural collage, where base elements of viscous drone almost worthy of Oren Ambarchi and radiant ambience create a vivid, widescreen backdrop filled with grainy TV and radio samples and guitars ranging from alt.country twang to Sunn 0))) doom, setting scorched yet fertile ground for MC Dälek's lucid narrative. No singular element dominates the page like you may expect from a Dälek album, each is solemnly given their time in the foreground, gradually building in intensity thanks to deft mixing board trickery and drawing us into a meditative calm at the centre of some wider madness just perceptible at the very edges of the sound sphere. There's some truly magisterial moments to be found in here, and you really shouldn't let any preconceptions about Dälek being a noisy industrial hiphop band shirk you from checking it. Highly Recommended.