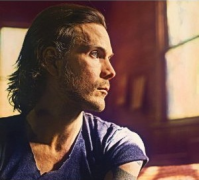 For Simone Felice, his self-titled Team Love solo debut has literally been a lifetime in the making. As the former drummer, writer and vocalist of The Felice Brothers explains, “This album is the one I’ve had buried away, somewhere in my weird heart."

Felice doesn’t use the word “heart” casually. When you sit with him in a room you can hear a subtle metallic ticking noise. If you hunt for the source of the sound you'll find a vertical scar bisecting the entire length of his chest, a visceral reminder of the open-heart surgery he was forced to undergo in the summer of 2010 after a childhood congenital defect brought him to the brink of death. He traces the line of that scar as if it’s where his new songs actually emanate from, and in a way they do. Simone Felice is strikingly simple in its arrangements but extravagant in its emotional impact. There is a luminous aura surrounding these compositions, something magical and otherworldly, even when the lyrics are startlingly topical or reference historical events, on tracks like “Courtney Love,” “New York Times” and “Ballad of Sharon Tate.” Felice conveys his often mournful tales of star-crossed lovers and beautiful losers with remarkable empathy. Given his own life-and-death experiences – the recent surgery and the birth of his first child were just the latest chapters -- his approach can genuinely be called openhearted. Over the course of a year, this Catskill Mountains-based artist found the most deeply resonant places in which to record his work, settings that were as haunted in their rafters as he felt in his bones: a barn near his home in the woods, an old church in London, an abandoned high school building by the Hudson River. What he created in these hushed, hallowed places is music that could be called folk but that has running through it a ghostly gospel-like feel. Occasionally helping him realize his vision were friends from Mumford & Sons, The Felice Brothers, and even the members of a local girl’s choir, the Catskill High School Treblaires.

Felice has long been a storyteller, writing prose and poetry as well as songs, and he has a truly remarkable story of his own to tell. In fact, Britain’s esteemed Guardian newspaper commissioned Felice to write a memoir about his young life and the health travails that culminated in his 2010 surgery. Born in 1976, Felice was raised in the Catskill Mountains, in the shadow of Woodstock, the same area where Bob Dylan famously retreated to workshop with the Band after his mysterious motorcycle accident. As Simone, whose gaunt looks balance the sensitive and the rough-hewn, declares: “I was born in the woods, with a drop of Indian blood. As a boy, I swore I saw a Mohican ghost among the birch trees. Or maybe it was just the acid."

When he was 12 years old, Simone suffered a brain aneurysm and was pronounced clinically dead for several minutes. Following emergency neurosurgery, doctors warned his family that there was a good chance he would not survive. If he did make it, his motor faculties might be seriously impaired. Not only did he recover, but the young Felice began to apply himself to his creative endeavors with an urgency that only those who have looked death in the face can exhibit.

“I didn’t know it at the time,” Felice recounts, “but writing the memoir for the Guardian forced me to put my archeological helmet on and really dig up the past. Maybe I've always been walking that stone wall, the one between this world and the other.”

At 15, Felice was fronting a local punk band; a few years later he was starting to make treks to New York City, playing the fabled CBGB’s and other low-down clubs. Simone then turned his attention to the written and spoken word, penning stories and poems and performing monologues at the Nuyorican Poet’s Café on the Lower East Side. He eventually published two short works of fiction: Goodbye Amelia (2004) and Hail Mary Full of Holes (2005). A decade ago, just after 9/11, he resumed songwriting in earnest, collaborating with his brother Ian on a series of homemade recordings, which led to the formation, in 2006, with Ian and younger brother James, of The Felice Brothers. The sibling group started out playing on the streets and in the subways, but within a few short years they were traveling the world, playing Bonnaroo and the Newport Folk Festival and supporting artists like The Band's Levon Helm, Bright Eyes and Gillian Welch.

In 2008, all-star producer Rick Rubin tapped Felice to drum on the sessions for The Avett Brothers’ breakout release I and Love and You. This not only lifted Felice’s profile but also provided him with valuable lessons about the record-making process: “I wrote close to 30 songs for my album, but in the end I chose the 10 that really told the story. That’s something I learned from Rick. He drives his artists to write, and write, and keep writing. That’s what I did. It's not an album until it's an album. I had to learn not to be afraid to throw ideas away. I guess it's a good exercise for life itself, learning to let things go, like the victims of a flood.”

Between his work with The Felice Brothers and the launch of his solo career, Felice briefly formed The Duke & The King with a group of friends, releasing two albums that were especially well-received in the U.K. by critics and audiences alike. He also completed his first novel, Black Jesus, a timely saga about a veteran blinded by a roadside bomb who “comes home to a dilapidated America and finds the first real love of his life. She's a runaway, a busted angel, and she teaches him another way to see.” As with his novel, Simone Felice focuses on stories about people he has known or read about, yet each contains a facet of Felice himself. “Courtney Love” is less recrimination than rumination on the loneliness in all of us that can lead to reckless, desperate behavior. Lead single "You & I Belong" (with friends from Mumford & Sons) finds Felice praising each new morning, a difficult chore in today's pixilated world of seven billion distractions. The darkly exquisite “New York Times” is a commanding lyrical onslaught about the dire state of the front page news. Simone Felice is both the start of a new career and the culmination of an arduous journey, an arc that began with his life-threatening aneurysm in 1988 and ended with his 2010 open-heart surgery. Felice has lived – really lived – to tell the tale.