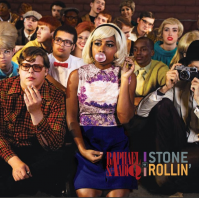 Raphael Saadiq started out as a member of 1980s/'90s New Jack Swing R&B group Tony! Toni! Tone!, going by his birth surname of Wiggins, and working alongside his cousin and brother. Going solo under the name Saadiq, he had his biggest hit before leaving the group, with the 1995 single "Ask of You." He didn't release his first proper solo album until 2002, though, as he was kept busy by his status as an in-demand producer for D'Angelo, Kelis, The Roots, Mos Def, and countless others.