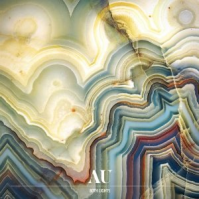 Portland, Oregon duo AU have never sounded more alive, more vibrant and more human than on Both Lights. Luke Wyland and Dana Valatka have channelled their need for catharsis into the physical side of making music: the pleasure of connecting with real instruments; writing intricate, multi-layered songs; astonishing live performances. It makes their music immediately engaging, lending it a razor-sharp energy, even at its quietest and most contemplative.

Both Lights, their long awaited third album and first for The Leaf Label, is the closest their recorded incarnation has yet reached to the blissful force of an AU live show, both expanding outward in new directions and tightly honing their compositional abilities.

Luke Wyland is the leader and principal songwriter of AU (pronounced ‘Ay-You’). After recording his debut album peaofthesea under the name luc in 2005, the band came together as he began to perform live. Over a number of records and various live incarnations Wyland’s songwriting matured, from 2007’s softly-spoken Au to their last full-length proper, 2008’s acclaimed Verbs. Faced with the realities of touring full-time, Wyland teamed up with drummer Dana Valatka and set about rearranging Verbs’ densely layered songs to suit this new, slimmed down AU.

Having spent his teens and twenties playing in metal and exploratory rock bands, Valatka’s hard-hitting approach to percussion and wild onstage energy was a further catalyst for transformation. Their work as a duo became increasingly collaborative, pushing them both to the limits of their own playing abilities. Their live shows shifted to match, simultaneously more intense and more exuberant, with Valatka on percussion and Wyland taking care of everything else: vocals, keyboard, sampler, lap steel, banjo and melodica (often two or more at once). The first recorded result was 2009’s tremendous Versions EP, featuring radical reworkings of songs from Verbs, on which the duo carefully pared away any extraneous material, leaving the raw emotional matter of the songs intact and exposed.

Following a lengthy 2009 tour (140 shows in that year alone, playing alongside Deerhoof, WHY?, The Dodos, Akron/Family and more), AU returned to their hometown, and set to task on what became a rebirth of sorts. The recording process for Both Lights took nearly two years, and found them seeking an entirely new approach, beginning most of these songs as simple improvisations. “It was a real process of letting go,” says Wyland, “A sort of subliminal shift into sounds and ideas that, at first, felt quite challenging.” Rather than sounding like a tough record to make, Both Lights is striking precisely because it feels so animated, so triumphant.

Exploding from the blocks with the uplifting ‘Epic’, the entire album draws its power from this process of renewal, erupting joyously into life. Complete with earth-cracking saxophones by man-machine Colin Stetson (the powerhouse who also contributes to the album’s first single ‘Solid Gold’), it’s an appropriate opening salvo for an album that began life in a tiny room that Wyland built from scratch in the back of a friend’s garage, and sprawled into a one-man tug-of-war with love, loss, pain, anger and desire.

Featuring the vocal talents of Portland singer Holland Andrews (who also appears on ‘Get Alive’ and ‘Crazy Idol’), ‘Solid Gold’ evokes the volatile and thrilling highs and lows of a new relationship. While working on Both Lights, AU contributed a track to the Tradi-Mods vs. Rockers compilation, which found them and their contemporaries reinterpreting the electrifying music of Congolese ensembles Kasai Allstars and Konono No.1. Those groups’ influence is present in the metallic melodies of ‘Solid Gold’ and the machine rhythms of second single ‘OJ’: equal parts tenderness and heady, nervous energy.

“It’s a true amalgam of my entire history with music and the sense of self I have gained from it since I was a child,” says Wyland. “I was seeking to write music that fully encompassed myself, rather than relying on superficial playfulness and shying away from saying anything uniquely my own.”
So it makes sense that Wyland has allowed his resonant baritone to take centre stage on Both Lights in a way that previous AU albums only hinted at. Where in the band’s earlier days he was camouflaged among fellow singers or hidden behind dense layers of instrumentation, here his exposed voice lays bare a delicious tension between the music’s mood of joyous release and the darker, more cautious tone of his lyrics. The music behind him flits with gleeful abandon between styles - choral folk, ferocious jazz-punk, wild percussive workouts – and the album’s singular, freewheeling logic is defined by the duo’s willingness to let go of constraints and allow the music’s natural flow to dictate the direction of their playing.

Both Lights closes with a suite of sorts, a final quartet that traverses AU’s entire range while serving to draw all the album’s disparate themes together for one final volley. The manic, thrashy ‘Why I Must’ slides seamlessly into the softer landscape of ‘Go Slow’. Next song ‘Old Friend’ features a beguiling half-sung, half-whispered vocal turn from Sara Winchester, for whom the song was written, and who has contributed to every one of AU’s albums. Its closeness and intimacy bleeds finally into towering closer ‘Don’t Lie Down’, which ends the album as it began: with a call to arms, to action and to life.