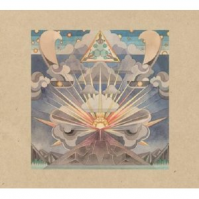 Fields, the debut album by Jose Gonzalez's band Junip, was nearly a decade in the making, and it sounds like it. Not because it's particularly elaborate -- actually, in many places, it's nearly as spare as Gonzalez's solo work -- but because the chemistry evident on these songs only comes with time. Gonzalez and his bandmates, keyboardist Tobias Winterkorn and drummer Elias Araya, began playing together in the late `90s. Though they went in different directions for several years, with Araya studying art and Winterkorn teaching and building a studio while Gonzalez made a name for himself as a solo singer/songwriter, Fields' simple, confident, surprisingly easy feel shows that Junip was never far from their minds. They sound like a real band, and Gonzalez is as much a team player here as the other two-thirds of the group; while "To the Grain" could have appeared on one of his own albums, most of these songs are fleshed out in their own unique way."In Every Direction" kicks off the album with hypnotic beats and keyboards that have a much more rock feel than anything Gonzalez has done on his own, while "Tide" closes it with big drums and drones. In between are songs filled with interesting, but not showy, textures and ideas, from "Rope & Summit"'s acoustic Krautrock motorik to "Sweet & Bitter"'s distorted beats. "Howl" is another standout, futuristic folk-blues with percussion that sounds like an impromptu rhythm tapped on a water glass. Elsewhere, jazz and the repetition-basedEthiopian music Gonzalez grew up with make their presences felt, giving Fields a subtly exotic feel that sets a lingering mood. Indeed, mood sometimes overtakes songwriting, with tracks like "Without You" and "Off Point" focusing more on atmosphere than melody. Despite this, it's a real pleasure tohear Gonzalez thinking and playing bigger here with the help of his friends. Fields is intriguing in a low-key way thatgrows with repeated listening and will make Gonzalez fans into Junip fans.