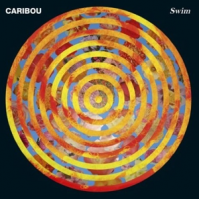 This is Caribou's tenth album in his varied and successful career under that name (he was formerly Manitoba). Yet no one could have quite predicted the particular sound that 'Swim' takes, nor genuinely anticipated the amount of emotion that he has crammed into this nine track album. It is a hypnotic arrangement of disco synths, soft vocals and persistent kicks which all amounts to one of my favourite albums of the year. Caribou's voice echoes and reverberates over the beats, floating in and out of tracks with a certain sadness that seduces the listener with its tone. All the songs sound as though they have been dipped into running water, with a fluid, washed out feel to most tracks. Caribou himself said that he had tried to make the album sound as if it had been made out of water rather than metal, and this philosophy definitely comes through in tracks like 'Kaili' and 'Leave House'. With a lot of attention being given to 'post-Dubstep' right now, it is great to have an artist bring out an incredibly beautiful album without having to tick the boxes of 'experimental' and 'bass heavy'. Not just that, Caribou's soft voice brings something very unique and personal to this album which can often be absent from other dance music records.