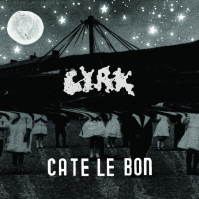 Filled with high-energy strumming, drumming and recorder playing, the music on Cate Le Bon’s second album, CYRK, is a perfect fit for her deep, soulful, Nico-esque voice. Singled out in the past for having very dark lyrical content (she buried many pets in her childhood), Le Bon has departed a bit from this with CYRK. Le Bon’s lyrics require a close listen and interpretation, with every song being deeper than her sometimes high-pitched sweet voice, piano and recorder tend to make the listener believe.

Le Bon in CYRK comes into her own after having been under the arm of fellow Welsh Gruff Rhys of Super Furry Animals for a few years. If working with Rhys influenced Le Bon’s music, this is not present in CYRK. CYRK starts with lots of energy, which then seems to decline by the middle of the album to offer more mellow ballads culminating in the two-part “Ploughing Out.” Tracks like “Julia” and “Fold The Cloth” don’t vary much in the strumming or drum beats, but they do offer the chance to see how versatile Le Bon’s voice is as it is batted around from low to high ranges while managing to maintain a dreamy quality throughout. Though Le Bon composes in the dark, she shows us a lighter, quirkier side in CYRK.