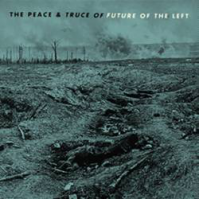 Future Of The Left

The Peace and Truce of Future Of

Future of the left are a rock band from cardiff, wales. they were formed in 2005 as part of a plea agreement following their involvement in an arms deal which left an actor playing tony blair dead, or at least pretending really well. they are made up of andrew falkous, jack egglestone and julia ruzicka and have also included kelson mathias and jimmy watkins in their history. the forthcoming record will be their fifth studio album and the second to be released on their own label, prescriptions. A  Recorded by Anthony Chapman at Monnow Valley studios in Monmouth it contains thirteen songs (you are welcome to call them \'tracks\', only not near the band) and is, once again, their best one yet, obeying the universal law that the new album is always the best one, otherwise it wouldn\'t be released in the first place. A