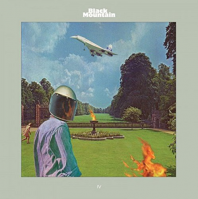 The rock canon has many anti-heroes, Black Mountain being the latest. In the past, Can's Tago Mago established that the only rule in rock and roll is that there are no rules. Pink Floyd's prodigious output in the 70s showed us that architecture can be cool, while delinquent proto-metalers Black Sabbath demonstrated that you can make a lot from not that much. Now Black Mountain teach us that you don't have to be afraid of the past to move bravely into the future, defining what it is to be a classic rock band in the new millennium. They unleash 'IV', an unapologetically ambitious record made by a group of musicians who are at the peak of their powers. The group's sense of rediscovery as a creative whole is tangible throughout. Stephen McBean, Jeremy Schmidt, Amber Webber, and Joshua Wells were joined in the studio by spiritually attuned bassist and veteran purveyor of the riff, Arjan Miranda (formerly of S.T.R.E.E.T.S, Children, and The Family Band) whose roots, heart, and soul are connected to the same soil and cement that Black Mountain were borne from. Recording was primarily done in close collaboration with producer Randall Dunn (Sunn O))), Wolves In The Throne Room, Marissa Nadler) at his trusted Avast! facility in Seattle.