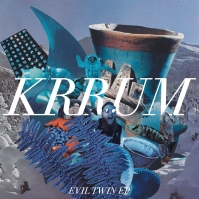 Born in the close, sometimes-claustrophobic confines of The Dark Peak, Krrum started writing songs at the age of thirteen, stumbling into his pseudonym whilst working at a butchers. Keen to broaden his horizons, he moved to Leeds to study, where he also became engrossed in the aesthetic and beats of early-Gorillaz, the melancholic songwriting of Justin Vernon, and the eccentricity of Jai Paul. Among the early results, opening track ‘Morphine’ is an introspective, gently pulsating cut of electro-soul which describes, he says, “struggling to let go of something, even if it’s causing you grief and you know you’d be better off without it.” Lead song 'Evil Twin', meanwhile, mixes a blast of brass with infectious, distorted vocals, inspired by all the things about you that you don't like or regret doing, and personifying that as someone else."