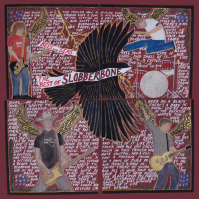 Bees and Seas The Best of Slobbe

Slobberbone was one of my favorite bands in America. In the world# - Patterson Hood The story goes, Slobberbone was born in a Denton, TX  Park #n# Go beer store parking lot in early 1992. Over the course of the next four years the band would cut their teeth and earn their chops across the Texas music landscape. 1996 brought forth the release of the band#s debut album, Crow Pot Pie. The world would eventually be blessed with three more Slobberbone albums (Barrel Chested, Everything You Thought Was Right Was Wrong Today, Slippage) before the band decided to call it quits. Bees and Seas The Best of Slobberbone is a not a mere greatest hits album but more a creative retrospective, a painstakingly selected group of songs that best represent who the band is and was. The majority of these songs are set to be released on vinyl for the first time ever. This 2-CD, 180g double LP set features an original cover painting by Will Johnson (Centro-matic, Monsters Of Folk) and liner notes by Patterson Hood (Drive-By Truckers). The design also features images and memories submitted by fans in an online artwork contest. New West Records is pleased and proud to put out a #new# Slobberbone record!