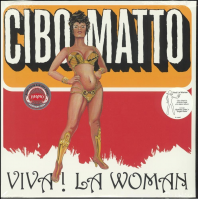 Cibo Matto, Italian for #crazy food# is a New York City based band formed by two Japanese women, Yuka Honda and Miho Hatori, in 1994. Their debut album, Viva! La woman was released in 1996 and has been described as #urban trip-hop#. The album spent six weeks at the top of CMJ's College charts and was named as one of the ten best albums of 1996 by Spin magazine, later being listed in their "Top 90" albums of the 1990s.