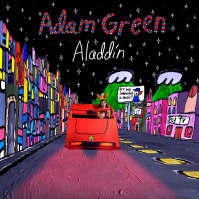 Three years in the making, Adam Green is ready to reveal his most fascinating project to date. \'Aladdin\' is the shimmering soundtrack to his very own hyper-sensory, poetic and humorously subversive film of the classic Arabian Nights tale, made with a cast of recognised New York musicians, actors and artists. Soundtracking a modern twist on the traditional tale and starring himself as the title character, Adam Green\'s \'Aladdin\' is 13 new songs of unbridled and joyous fantasy. It\'s the sound escaping from the crevices of Adam\'s symbolic imagination where the lamp is a 3-D printer, the princess is a decadent socialite, the planet gets a sex-change and its population prints out an analogue version of the Internet. LP - With CD Version.