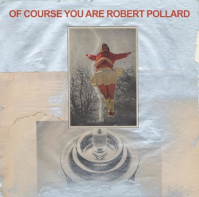 Of Course You Are

Of Course You Are is solo album number twenty four (!) by the tireless Guided By Voices auteur. Meticulously constructed, Of Course You Are is overstuffed with hooky tunes, riffs aplenty and skewed / skewering lyrics. Pity the poor rock critic who tries to keep up with Robert Pollard. If your magnificent-opus-listening time is circumscribed, play track #6, "I Can Illustrate" three times in a row. The wizardry of Pollard's craft is easy to overlook on a cursory spin. Three listens and you'll be hooked, lined, and sinkered. To some extent, the new solo album is a natural outgrowth of Pollard's 2015 work with Ricked Wicky; and to some extent it's a return to early-2000s Guided By Voices, with its combination of instrumental virtuosity and Pollard's uniquely oblique approach to songwriting. All of the instruments on Of Course You Are were played by Ricked Wicky's Nick Mitchell, who also recorded/produced the record, and Mitchell's evident musicianship lifts the material to another sonic level without over-polishing. The instrumental palette has been broadened -- discreet flourishes of strings, horns, piano (etc.) occasionally bring to mind baroque rock classics by the likes of Love and Cardinal. Which is not to say this is chamber pop. These songs are all determinedly guitar-driven, however textured, and rock as hard as anything Pollard's done to date. Mitchell's occasional virtuosic solos are concise, but the guy can shred, and when he does, he does. Mitchell is a heretofore hidden gem discovered by Pollard in their mutual Dayton, OH hometown. As tuneful as you'd expect from anything issuing from Pollard's pen, Of Course You Are runs the usual gamut of Pop, Prog, Psych, and even Punk-oriented tracks. His vocals are impeccable, his phrasing as sharp as ever he seems invigorated by the collaborative juice provided by Mitchell, who himself has clearly been liberated by the opportunity to take the reins in the studio, and delivers in (aces of) spades. Taking nothing away from any of Pollard's previous co-conspirators, Mitchell's inspired, unmuddied production and precise playing on Of Course You Are hits all the right marks underlining the direct emotional tug of "That's The Way You Gave It To Me" with melancholic Court of the Crimson King-era mellotron, providing a swirling psychedelic backdrop not too far removed from Mr. Blue Sky-era ELO on "Losing It," and punching up the album's rock-hard opener "My Daughter Yes She Knows." Long Live Instant Pandemonium's" classic rock riffs contrast the poignant strings on Come And Listen,' while Contemporary Man (He's Our Age) foregrounds Pollard's vocal musings over kinetic percussion and electronics (and more strings). Taken altogether, the twelve concise song-slabs on Pollard's first album of 2016 (you and I both know it won't be his last) make for both an auspicious start to the New Year of Bob and a welcome harbinger of great things to come. Don't sleep. Seriously. Don't.