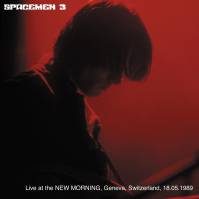 Originally a bootlegged limited edition vinyl only release on Swiss label Mental Groove Records, Space Age Recordings are very pleased to at last announce the March 4th 2016 official release of the live album "Live at the New Morning" by Spacemen 3 presented in a fold out card wallet featuring liner notes by Sonic Boom and previously unseen photographs. Originally recorded in Geneva, Switzerland during their 1989 European tour whilst Spacemen 3 were in sublime live form. Now digitally re-mastered by John A. Rivers at Woodbine Studios in 2015 this release further cements Spacemen 3's reputation as one of the most influential and seminal bands of the space rock and drone rock oeuvres. I seem to remember this show more distinctly than most, and always did. Spacemen 3 was a band not overly loved in their day. It was tough, or at least uneasy. Musically people thought we were some sort of twisted joke. Which in some ways we were. You needed to be bloody-minded to make this music at that time. The set presented here, is as it was ... except the show was twice this length. We tuned and smoked for almost as long as we played. And then our disenfranchise moment, installed to filter the wheat from the chaff in our audiences the sprawling SUICIDE wheeled out here in a long mischievous version. We slipped away mid song amongst much fog and dry ice. With taped down keys and feeding back guitars propped against our speaker cabs keeping the song pulsating and screaming. Disappearing back down to the already too familiar dressing room. We rolled large smokes and cracked fresh drinks. And finally after an extended break re-appeared on stage. Not to wind down as normal at that juncture, but to re-fire up the piece for a further onslaught. Extending the maelstrom as bloody mindedly as we could. We always sensed when we were unwanted ... which was most of the time we left the cosy confines of our white sprinter van. Never get out of the van ... fuccking tigers! But then again ... maybe ... just maybe ... and it's only a maybe ...maybe l don't remember a thing. - Sonic Boom