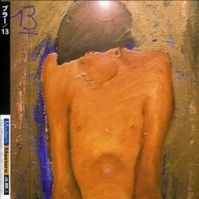 Blur's penitence for Brit-pop continues with the aptly named 13, which deals with star-crossed situations like personal and professional breakups with Damon Albarn's longtime girlfriend, Justine Frischmann of Elastica, and the group's longtime producer, Stephen Street. Building on Blur's un-pop experiments, the group's ambitions to expand their musical and emotional horizons result in a half-baked baker's dozen of songs, featuring some of their most creative peaks and self-indulgent valleys. Albarn has been criticized for lacking depth in his songwriting, but his ballads remain some of Blur's best moments. When Albarn and crew risk some honesty, 13 shines on "Tender," Albarn is battered and frail, urged by a lush gospel choir to "get through it." His confiding continues on "1992," which alludes to the beginning -- and ending -- of his relationship with Frischmann. On "No Distance Left to Run," one of 13's most moving moments, Albarn addresses post-breakup ambivalence, sighing, "I hope you're with someone who makes you feel safe while you sleep." While these songs