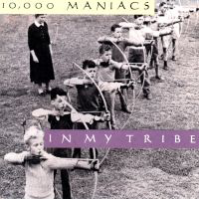 10,000 Maniacs were an alternative rock band formed in Jamestown, New York, in 1981 by singer Natalie Merchant and guitarist John Lombardo. Their second album, In My Tribe, was released in 1987. The bell-like voice and song writing talents of Natalie Merchant convey a multitude of social concerns across the album, including child abuse, war and the environment displaying them as a poetic, heartfelt message. The album was certified double platinum in the US.