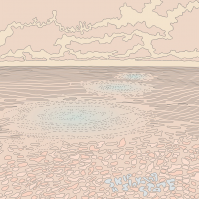 Skip a Sinking Stone, the new album by Mutual Benefit (aka Jordan Lee) is a two-part meditation on impermanence that also acts as a portrait of growing up. Mutual Benefit#s work has been praised as being vulnerable and warmhearted. This new album, his debut for Mom+Pop, has a similar sensibility, patiently built from carefully chosen lines illustrated by lush astral folk and intricately composed arrangements that manage to appear effortless. Skip a Sinking Stone takes place after the success of Mutual Benefit#s debut studio full-length, Love#s Crushing Diamond, with Lee settled into a life that passes as steady. The first half of the record, awash in warm string arrangements and hope, is written about the year that followed Mutual Benefit#s rotating cast of friends and collaborators is touring non-stop, playing professional stages and festivals, and Lee is in love. The second half of the album finds Lee in New York, in a rare position of having the time and resources to work on the new record full-time. Lee lives and records at the Silent Barn, breaking from his usual nomadic lifestyle to explore staying in one place, reflected musically by a comparative stillness and introspection. However, New York life presents another kind of unreality one colored by growing depression, a downturn in the relationship, and a city in turmoil, the atmosphere heavy with grief and anger in the wake of the Eric Garner verdict. #I kept coming back to how nice that was, throwing these stones against the water,# says Lee. #I thought it was a fitting metaphor for the endeavors I have in my life#sometimes they work out and sometimes they don#t. I think it#s a good exercise in accepting impermanence and failure and these things that are constant, and yet the activity of skipping stones is really relaxing and beautiful.# Each stone ultimately sinks, but, as Lee sings on the album#s zenith, as the cycle ends and repeats again, all we can do is maintain the hope that it#s #Not For Nothing.#