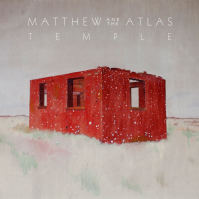 Matthew And The Atlas

Matthew Hegarty (aka Matthew And The Atlas) is a British songwriter and multi-instrumentalist and was the first artist to be signed to the Communion label (it was, in fact, pretty much so that they could release Hegarty#s music that Communion was born as a label in the first place.) After the dreamy and textured Americana of his To The North and Kingdom of Your Own EPs had built him a cult global following, Hegarty released the debut album Other Rivers in April 2014, prompting Q to posit him as #the British Bon Iver#. A sumptuous release, Hegarty#s new album, Temple, is the kind of record that it#s impossible not to sink yourself into. Bringing together the naked emotion of Sufjan Stevens with a dramatic rolling melancholy, it is a truly cathartic expression of its writer#s own fears and feelings, bound together by a universality of emotion and honesty that makes it bracingly easy to connect to. Musically speaking, #Other Rivers#, had seen Hegarty pushing the boundaries of a classic folk sound into a bold, synth-laden territory, amassing a fervent cult following in the process. With #Temple#, he has made a tender return to his roots. #The first album went quite far one way # we#ve pulled back a few steps this time,# he states. While #Other Rivers# was written more sporadically, over the course of six years, the songs that make up #Temple# took just three months. Sketched out in Hegarty#s home studio in his native Farnborough, for the first few months of 2015 he pushed himself to write a song a week. This modus operandi was a huge success, firing Hegarty up to create his finest work yet. With well over an album of songs written, he headed to east Nashville with bandmate Tommy Heap (bass, keys), to meet up with Brian Holl and Eric Hillman, otherwise known as electronic folk act turned production duo, Foreign Fields. There, the four men (joined at points by various local players), would begin crafting one of the first truly astounding albums of 2016. A #black figure# looms over the album in parts, a nebulous being that had first appeared in the aftermath of an attack once suffered by its auteur. New parenthood, too, has inevitably affected Hegarty#s outlook on life since he wrote his first songs. Extremely personal to its writer, yet exploring themes to which all listeners will relate in their own way, the results are at once quite beautiful, unsettling, and intoxicating. The artwork for Temple is a painting - #Site of Special Interest# - by the British artist, Ben Risk, who was subsequently commissioned to create new paintings that will form artwork for later singles from the album. Says Hegarty, #The image is of an old hunting lodge in the Scottish highlands, vividly splashed with red on a barren landscape and I loved how that worked with the title of the album 'Temple'.# The album art then became part of the genesis for a photo series of abandoned places as well, with Hegarty teaming up with photographer friend Dave Watts to create a photo project linked into the LP. The pair travelled to various locations across Cornwall and Somerset, with Watts shooting Hegarty in the wilderness, a tiny figure moving through a vast, desolate landscape, a small man in a big world but one most definitely about to make his mark on it.