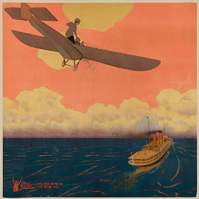 Waltzed in From the Rumbling

Plants and Animals are a Montreal-based trio that began playing together as kids, emerged on the international scene in 2008 and have developed a varied cult following ever since, built this on the shoulders of their self-produced records, their intense live show, or both--depending on who you ask. They have been on many tours on their own around North America and Europe. In 2013, they decided to slow down. By slow down, they meant make music the way they used to. It was the beginning of what would be an on-and-off recording process stretched out over two years. It was a time of rest, as the story often goes, for a band that had seen plenty of touring and not enough home. They slept in their own beds and made their new album through nine seasons and the thick of life. Through births and deaths, most notably - magnificent sunrises, shattering sunsets and the days between. Their new LP is called \'Waltzed in from the Rumbling\'. It is a dance of days. By make music the way they used to, they meant to follow threads to their frayed ends. They recorded any ideas that popped up and edited impulsively. Lyrics were often streams of consciousness, bent into shape. They left mistakes in place where they had their charms, looking to expose rather than conceal. The lead singer doubled as engineer, the lead guitar player as baroque pianist, the drummer as inside-outside eye. They called in friends to sing, to play bass, keys, strings and horns. They found an antique guiro next to an obsolete VCR on the curbside and recorded both. They made an empty fridge sound like a timpani drum. They covertly recorded girls\' brash gossip on a city bus. They discovered the guy who always hung around in the kitchen was a cabasa wizard. It all found a place. They took the path of big production. They pulled down the curtains and showed their hearts and bones. It felt like the time that they quit their day jobs, holed up in a crooked apartment on Parc Avenue and made their first record. The influences are far and wide the broken soul of Van Morrison the off-kilter geometry of J Dilla the dark, French funk of Serge Gainsbourg the fire of John Coltrane\'s quartet Messiaen\'s synaesthesia the quirk of Angelo Badalamenti. A This is Plants and Animals\' most soulful and inventive collection of music yet. Eleven soundtracks for leaps taken, ships sailed, dark water and pink skies.