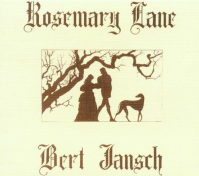 'Rosemary Lane' is the seventh album by Bert Jansch, released in 1971. 'Rosemary Lane' is a beautiful album recorded in 1971 during a time when Bert was still a member of the group Pentangle. After four albums with the group and losing interest in what they were doing, Rosemary Lane was like returning to the more simpler arrangement and sound of his early solo albums. The album was recorded with Bill Leader as producer on portable equipment in much the same way they had produced the debut album. The album was a throwback to happier times. The album has simple acoustic sound of guitar and vocals with expert playing and wonderful songs.