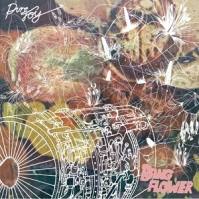 Rising from the smoking embers of several leading Merseyside acts, newcomers Pure Joy have now readied their playful, intelligent and refreshingly bold psych-rock to tape in the form of debut LP #Bang Flower.# This band of friends stemming from the Wirral (the beautiful, sleepy, wigged-out bank off the Mersey - Liverpool's Brooklyn if you will) serve up hot, psychedelia-heavy filthy garage-rock candy tinged with patches of late-60s American psych, buzzy Motor City riffage, and decades of British pop, ranging from the pastoral pop of Ray Davies to the vivid expansiveness of Kurt Vile and the Antipodean warmth of Tame Impala. From the blissed out cloudburst of #Bubblegum Husky# to the anthemic sun-blasted driving pulse of first single, #Katie's Gone Home#, the timeless sleaze of #Thunderlooper#, the lick-sodden Morrissey-esque weavings of #Theme From#Peach Fuzz# and the complex dream-weavings of #Turner Sky#, Pure Joy guide you through a neo-psych wonderland, gripping your sweaty mitt and lurching you into fantastical scenery (#Terrorize#) or into sheer bewildering, hippy-infested, hallucinogenic territory. On album closer #O#Sullivan On Song# the band float some creamy synth and trippy guitar interplay before ripping a hole across the chest of the song with a woozy guitar line so big it essentially serves as a chorus. Sampling the 1995 film Billy Madison, the band close their album with the phrase #May God have mercy on your soul.# Standing at 37 minutes, the brevity of the album only makes one yearn for the much-missed #repeat# button.