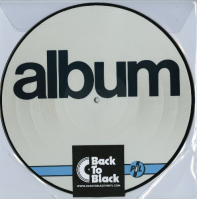 After the release of This Is What You Want, Lydon assembled yet another touring band. Martin Atkins stayed on, with Jebin Bruni and Mark Schulz joining the band's ranks. While gigging, Bruni and Schulz assisted in writing the material that wound up on Album. Atkins left to spend more time on his own projects after touring, and Lydon again scrapped his associates prior to recording. Anyone's first thousand guesses as to who Lydon would work with next couldn't possibly come close, as the unlisted credits for Album read as a motley crew of established musicians who literally have no business being anywhere near Lydon, let alone in a studio with him or with one another. Well, maybe that made perfect sense, given Lydon's ability to baffle. Bill Laswell produced and played bass, which isn't too much of a stretch. But Steve Vai, Ryuichi Sakamoto, and Ginger Baker? Baker's involvement is especially odd since PiL played an April Fools' joke on the press by announcing his membership in the early '80s. "Rise" successfully marries rock with Celtic folk (a heavier Dexy's Midnight Runners?) Lydon's chorus is his most hospitable yet. Opener "FFF" and "Home" are other strong points, driving and defiant. The former is as good as hard rock got in 1986. But Album can be found lacking in its reliance on outright professionalism and polish, emphasizing skill over craft. Vai's scorched shredding likely repelled Lydon's fans more than any of PiL's earlier attempts to alienate and frustrate. The 90-second wailing over closer "Ease" is anything but at most points, Vai's playing just doesn't fit. Unfortunately, Yellow Magic Orchestra member Sakamoto pops up only a couple times. His talent is pretty much wasted here. On the whole, Album is just as generic as its title.