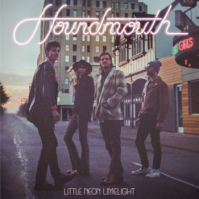 New Albany, IN's Houndmouth have confirmed the March 16 release of 'Little Neon Limelight' on Rough Trade. The follow-up to their "near perfect" (NPR Music) debut album, which saw them perform on Letterman, Conan, CBS This Morning, and tour with The Alabama Shakes, The Lumineers, and more, 'Little Neon Limelight' was recorded in Nashville with producer Dave Cobb (Sturgill Simpson). The 11 new, original songs on 'Little Neon Limelight' are the band's best to date, blending their signature four-part harmonies with the gritty foot-stomping rock swagger of their live shows and a loose confidence in the studio. Highlights of 'Little Neon Limelight' include the live fan-favorites "By God," "My Cousin Greg," and "Say It," and the acoustic track "For No One," which recently premiered on NPR Music, and is unlike anything else Houndmouth have ever recorded. Ann Powers called "For No One" an "epic ballad, stuffed full of vivid imagery." On "Gasoline," Katie Toupin (keyboard / vocals) barbs the confessions of a perennial party girl with the specter of mortality ("Maybe I'll meet my maker on a bedroom floor"). Shane Cody (drums / vocals) leads vocals on the album's heartbreaker, "Honey Slider," and the group embraces their garage-rock influences on the thrilling, needle-in-the-red cut, "15 Years," which finds Zak Appleby singing one of the album's most infectious refrains ("15 Years on the county line / Enough to make a man nearly lose his mind.")